Back at the start of 2011 I made 7 resolution, unfortunately, I failed to achieve most of them...I'm wondering if I should try again this year.

1. Sew at least 12 garments in 2011.
I made it to 11, so not a total fail. In fact I made a lot more than 11 garments - I've made trousers for my Mum, a skirt for a gift and about another 20 garments for myself and others to wear as costumes. As I'm going to make a lot more costumes in 2012, I'm going to try to make time to sew for myself as well. I think I'll be repeating this resolution!

2. Lose weight – any amount!
Success! I lost some, put some back on but I've come out ahead by 16lbs :) Another couple of pounds this year would be nice but I'm pretty pleased with this resolution!

3. Learn some German
Done. I took a class in beginner's German, though how much of it stuck, I don't know!

4. Redecorate sewing room
Fail. I did get a new kitchen though...

6. Sell clothes on etsy and ebay
Started and going well. I do need to get more items listed though.

7. Live with less – set budgets and stick to them!
Sigh. Total fail. Out of necessity I'm going to have to do this better now.


So, a mixed bag from last year's resolutions. Can I do better in 2012? As I've realised that I do tend to over-commit myself, my main resolution is to me more realistic about about what I can actually fit in and achieve. As such, I'm making just 5, easily achievable resolutions;

1. Sew 12 garments for myself in 2012
2. Eat more healthily and drink less
3. Organise my sewing room to make it a better work space
4. Go out more in the evenings
5. Budget properly. This includes recording business expenses properly.

How successful were your resolutions, and have you made any more?
Posted by Lauren at 20:04 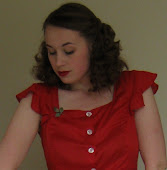